Those of you that follow my twitter page @chris180mason will know I usually tweet my tips, which mainly focus on the 180 markets. I always get plenty of requests for my picks to win the whole event. This is not really anything I usually look at too closely, but I will give you my first round selections below.

Michael van Gerwen (1, Netherlands) v Joe Cullen (England) - Joe is a really talented player, but MVG will just have too much for him right now.
Stuart Kellett (32, England) v Viljanen/SteinTerry Jenkins (16, England) v John Weber (Australia) - Terry is having yet another second wind in his career, too much experience for John.Justin Pipe (17, England) v Lawrence Ryder (Australia) - I've got JP to take this one.Dave Chisnall (8, England) v Ryan De Vreede (Netherlands) - Chizzy is back on form, he'll get a comfy win.Paul Nicholson (25, Australia) v Benito van de Pas (Netherlands) - This could be the first upset. Benito is super talented and will shine in this one.Robert Thornton (9, Scotland) v Andrew Gilding (England) - This will be a really tough game for Rob, it could go close with Rob just nicking it. Ronnie Baxter (24, England) v Mackenzie/Gurney Peter Wright (5, Scotland) v Gerwyn Price (Wales) - I've been very impressed with the Welshman, but lack of experience at this level will make it a step too far against the flamboyant Scotsman.Andy Smith (28, England) v Ronny Huybrechts (Belgium) - Ronny has not really been on it as of late; I've got the Pieman to take a close encounter.Andy Hamilton (12, England) v Dave Richardson (Canada) - Andy has really been off the pace recently, but I'm sure he will get himself right for this one.Steve Beaton (21, England) v Kyle Anderson (Australia) - This could be yet another upset. Kyle has great memories of Ally Pally.Gary Anderson (4, Scotland) v McGrath/Kirchner Jelle Klaasen (29, Netherlands) v Christian Kist (Netherlands) - I cannot split them, flip a coin.Wes Newton (13, England) v Perez/ReyesKevin Painter (20, England) v Koltsov/MuramatsuPhil Taylor (2, England) v Jyhan Artut (Germany) TaylorMark Webster (31, Wales) v Ron Meulenkamp (Netherlands) - Webster will win this, but it will be a tight match.Ian White (15, England) v Haavisto/MichaelKim Huybrechts (18, Belgium) v Mickey Mansell (Northern Ireland) - This will be tough for Kim but he will edge it.Simon Whitlock (7, Australia) v Darren Webster (England) - Whitlock is showing some signs of form but this is a real chance for Webster. He keeps getting himself in winning positions but he needs to get over the line.Dean Winstanley (26, England) v Wayne Jones (England) - My mucker Wayne is really struggling right now. Dean has been playing well, so I've got Dean to shade a nervy affair.Mervyn King (10, England) v Max Hopp (Germany) - We've got another young talent in Hopp, but Mervyn King will be a bridge too far.Vincent van der Voort (23, Netherlands) v John Henderson (Scotland) - VVDV has played some of his best darts in recent months, but you never know with big John. I've got Vincent to take it.James Wade (6, England) v Jamie Lewis (Wales) - Wade is in great form. Jamie will show his talent, but experience will tell.Stephen Bunting (27, England) v Wattimena/Marijanovic Brendan Dolan (11, Northern Ireland) v Arendse/HonMichael Smith (22, England) v Mensur Suljovic (Austria) - Mensur is a very dangerous opponent; Bully will have to be on his metal. Adrian Lewis (3, England) v David Pallett (England) - Pallet is another super-talented newcomer. Like Smith, Lewis will have to take this one seriously, but he will prevail.John Part (30, Canada) v Keegan Brown (England) - Another seed could tumble here, but Part, a genuine darting legend, will never roll over and have his belly tickled. Raymond van Barneveld (14, Netherlands) v Rowby-John Rodriguez (Austria) - Rowby is no stranger to causing an upset, but again experience will count for everything in this one. RVB to get over the line.Jamie Caven (19, England) v Jason Hogg - Hogg came through the qualifiers, but this is a totally different environment, Caven to take it.
Posted by Chris Mason at 13:16 No comments: 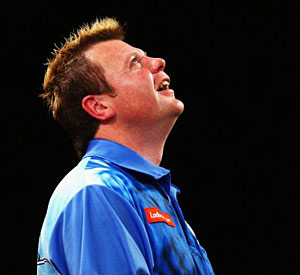 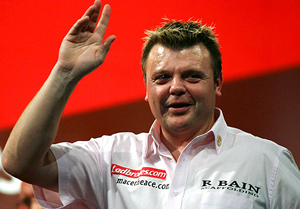